After studying privately with Dr. Gold for several years, she went back to finish her degree in IPSB so she could deepen her knowledge as well as receive a certificate in Thai massage.

Kristina began assisting Dr. Gold in his Thai massage classes in 1997 and was asked to teach as a primary instructor of traditional Thai massage at IPSB in the spring of 1999.  She was offered a position at the Pacific College of Oriental Medicine shortly after where she taught Thai massage for 15 years.

When first traveling to Thailand, Kristina studied with Chonkol Setthakorn, Dr. Golds original teacher.  She received a certificate in advanced levels of traditional Thai massage as well as a teacher training certificate. Kristina has since been to Thailand several times and studied with many other healers and teachers in small classes or in one on one situations. 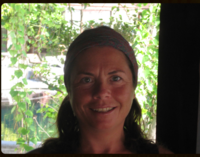 Kristina has immersed herself in the study of Traditional Thai bodywork for the past 25 years. She has held a private practice specializing in Thai bodywork since 1993 and has been instructing classes at the Pacific College of Oriental Medicine and at IPSB in San Diego since the late nineties. Kristina is an approved instructor and a registered Thai Therapist with the Thai healing Alliance International as well as an approved CE provider with NCBTMB.  She visits Thailand periodically to connect with other teachers and to broaden her knowledge of the Thai healing arts.

She is currently residing on the island of Kauai, Hawaii

Kristina Eberle began her studies in oriental methods of massage at the International Professional School of Bodywork in 1991.  She began studying Traditional Thai massage in 1992